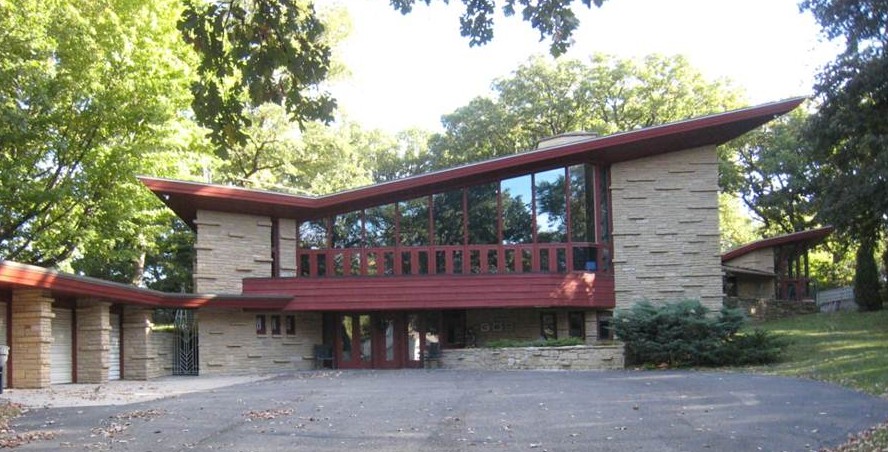 S.P. “Pearl” Elam and his wife toured Taliesin East in 1948 and mentioned to John Howe (Wright’s Chief Draftsman) that they were interested in building a home. Wright met with them immediately. He designed the home from photographs of the lot never setting foot on the property.   Completed in 1951, the Elam House is one of 4 Wright homes in southern Minnesota and only 13 in the entire state of Minnesota.

Built in one of the nicest neighborhoods in the city of Austin, the Elam House offers privacy and quiet.   An opportunity to rest and recharge while undergoing a certain “Zen” experience affordable only to those who occupy a Wright house.    Or you can go hiking, biking, swimming, boating, fishing, golfing and in season – cross country skiing, snowmobiling or ice skating on our back yard rink or one of the many other skating rinks in Austin.

The meticulously done stone work took two years to complete under the direction of general contractor A.J. Zeimer.   The final design included 5 bedrooms and 6 bathrooms.    Each bedroom has its own private bathroom, most with bathtubs and two with shower and bathtub.   There is also a half bathroom near the kitchen.    One of the original design drawings which we have on display in the Gallery shows the house as an 8 bedroom home with an entire wing where the garage is now.    For reasons unknown to us, this original design was rejected by Mr. Elam.   It is said that there was also some controversy between Mr. Wright and Mr. Elam regarding a narrow kitchen window that Mr. Wright thought was inappropriate for the design.   The window was installed.   Wright also designed the home for radiant heat (floor heat) only but Mr. Elam requested a forced air system as well.   As a result, the home sports two large “Kewanee” boilers and a huge air circulation system.

The Elam House obtained a conditional use permit to operate as a “Bed and Breakfast” from the Austin City Council in November, 2012.   Licensing was obtained from the City of Austin to operate as a Motel/Hotel and from the State Health Department in December 2012.    Although classified as a “Bed and Breakfast”, we are not serving any meals at this time and will be operating only as a guest house.    820 square feet of the house are available for rental.    Our guests will be provided with a one hour tour of the main part of the house between 7 and 8 pm.   If this time period will not work, another time will be arranged for you during your stay.    Reservations and maintenance are handled by the current owner and Innkeeper, Peter Plunkett who  resides in the house.

The Guest House is open year round.   To make a reservation, download the registration form, follow the instructions and then email, fax or mail it to Peter Plunkett.

Check Out Our Listing:

Book your room today and stay at a Frank Lloyd Wright Home!

The Elam House has all the amenities you will need for your stay.

View photos of The Elam House through our photo album

History of The Elam House

Learn about The Elam House, Architect Frank Lloyd Wright and its Owners